It’s been quite a while since I wrote an ‘Ingredient Breakdown’ post isn’t it? That’s mostly because I haven’t really been using any new hair products and have been sticking with old favourites a lot of the time. Recently though, I picked up this Aussie Aussome Volume shampoo & conditioner combo. These are targeted at fine flat hair. Since my hair definitely falls into this category, I thought I’d give this a go to see if it has any affect.

Overview & Thoughts
I picked up the bigger bottles (500ml shampoo & 400ml conditioner) and each one costs £5.99, which is more pricey than other shampoo & conditioner combos I’ve reviewed here on my blog. However, you can usually get them within some sort of offer at Superdrug or Boots which makes them a little cheaper.
One thing I’m not super keen on is the scent, it’s quite soapy smelling with a hint of spice, and is a bit too strong for me. I can still smell it on my hair after drying it, but at least it smells clean & some people might love the scent.
I’ve only been using these for a couple of weeks now, but I do think for the day after washing my hair has that little bit more volume. It’s nothing crazy, but it’s there!
I’m definitely enjoying these products! So lets hope the ingredients are okay…

Shampoo
*the higher the ingredient, the more there is within the product. 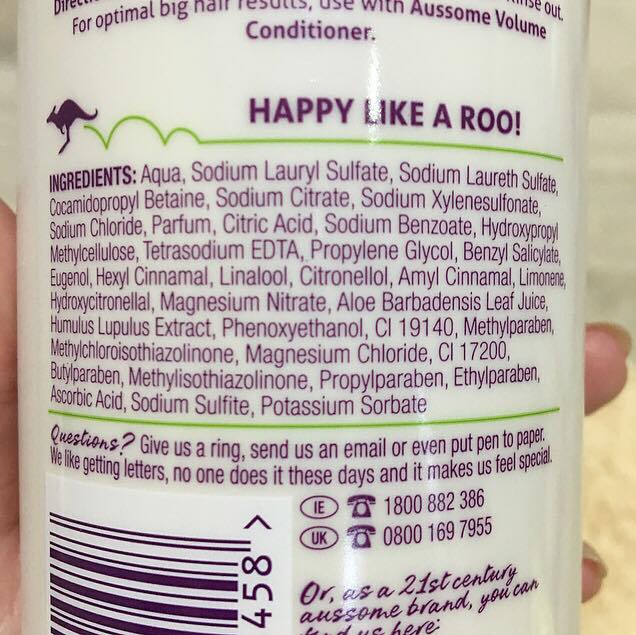 Aqua – Water
Sodium Lauryl Sulfate – This is a surfactant found in many personal care products and produces the lather in the shampoo, (because it breaks down the molecules to allow better interaction between the hair and shampoo). Although this is deemed as safe to use by many organisations, it is a known irritant to skin and eyes. It is also believed to cause dry and brittle hair, so some people try to stay away from this.
Sodium Laureth Sulfate – Very similar to Sodium Lauryl Sulfate, however this one is meant to be a little bit more gentle.
Cocamidopropyl Betaine – Another surfactant which causes lather in the shampoo and it comes from coconut oil. It is also a thickening agent to the consistency of the shampoo.
Sodium Citrate – A natural acid found in plants and animals. Used a preservative in many products.
Sodium Xylenesulfonate – Another surfactant.
Sodium Chloride – This is basically salt and is totally safe to use. It is used to thicken shampoo.
Parfum – Perfume. (a lot higher up in the ingredient list than normal..
Citric Acid – This can cause irritation. It is found in citrus fruit.
Sodium Benzoate – This ingredient is found naturally in cranberries, cinnamon and other foods. It is used is shampoo as a preservative.
Hydroxypropyl Methylcellulose – This has a lot of uses including being a surfactant and a thickening agent. It is safe for use.
Tetrasodium EDTA – A chelating agent which can improve the lather of shampoo. It has a low risk but some reports consider this toxic.
Propylene Glycol – Has quite a bad reputation as it is potentially toxic and is found in anti-freeze. It is also known to irritate the skin. However, it is found in many cosmetics and is generally considered safe in these amounts.
Benzyl Salicylate – A fragrant ingredient which is a known allergen and human immune system toxicant. There are some restrictions in use. Some people choose to avoid this.
Eugenol – Found naturally in plants. Often used as a fragrance in hair care. It has been said that this ingredient can be good for hair strength.
Hexyl Cinnamal – A natural ingredient used as a fragrance additive to make floral scents stronger.
Linalool – Used in floral fragrances. Occurs naturally in essential oils.
Citronellol – A fragrance ingredient which is known to be a human toxicant and allergen. There are restrictions in use. ‘Skindeep’ have this as a medium to high hazard on their database.
Amyl Cinnamal – Occurs naturally in plants. Used as a fragrance in cosmetics.
Limonene – Fragrance from citrus fruit. An irritant and toxic to wildlife and possibly humans. Has restrictions in cosmetics but in small amounts is allowed.
Hydroxycitronellal – A perfume ingredient. Floral scent with notes of lily and sweet melon.
Magnesium Nitrate – Inorganic salt which is used for conditioning.
Aloe Barbadensis Leaf Juice – Aloe Vera. Combats both excessive oil build up and dandruff. Promotes hair growth.
Humulus Lupulus Extract – Also known as ‘Hops’. A soothing ingredient. Also a fragrance.
Phenoxyethanol – Used as a preservative. Can cause allergic reactions and irritate the skin.
CI 19140 – The colour Tartrazine, it is a lemon yellow.
Methylparaben – Used as a preservative. A lot of people stay away from parabens as they have been linked to cancer – however there is no proof that it can cause cancer. It is only known that parabens can enter our body through our skin. It is up to each individual if they want to use them or not. The amounts they are used in hair care products are small.
Methylchloroisothiazolinone – An anti-bacterial and anti-fungal preservative. Restricted in products in some countries as it can be a skin irritant and toxicant.
Magnesium Chloride – used to increase thickness.
CI 17200 – Red colour
Butylparaben – See Methylparaben.
Methylisothiazolinone – Same as Methylchloroisothiazolinone.
Propylparaben – See Methylparaben
Ethylparaben – See Methylparaben.
Ascorbic Acid – Also known as Vitamin C. Can be known to make the hair grow.
Sodium Sulfite – Antioxidant. Reducing Agent.
Potassium Sorbate – Used as a preservative in cosmetics. Evidence that this is toxic to the skin. Used as a paraben alternative in some hair care products.

Conditioner
*the higher the ingredient, the more there is within the product.
*Anything without a description is listed above.

Aqua
Cetyl Alcohol – Acts as a thickener. Derived from petroleum or plants. (Used to come from Whale sperm oil, but thankfully it isn’t anymore). Maybe worth avoiding if you have very sensitive skin.
Stearamidopropyl dimethylamine – Derived from vegetable oil, and, like silicones, is used to keep oils and waters properly blended. Most people feel that this doesn’t keep hair as smooth and tangle free as silicone, but it is perhaps better for the hair.
Stearyl Alcohol – a fatty alcohol used to form emulsions and stop them from separating into its oils and liquid components. A conditioning agent that coats the hair. Deemed as safe but can be a human irritant.
Quaternium-18 – A hair conditioning agent and a surfactant. Is sometimes suspected to be an environmental toxin.
Benzyl Alcohol – A natural, non volatile alcohol used as a preservative. However, in products, we often find a synthetic version rather than the natural version. It is safe in the quantity that it is found in hair care products.
Cetearyl Alcohol – Emulsifier which stops the oils and liquids in the conditioner separating. Also a surfactant. Suspected to be an environmental toxin.
Parfum
Oleyl Alcohol – Another emulsifier. An antifoam agent and detergent. Found in fish oils.
Hydroxyethylcellulose – Another emulsifier and thickening agent. Not considered to be harmful.
Glyceryl Stearate – Surfactant and emulsifier. Deemed safe.
PEG-2M – Emulsifier and thickening agent.
Citric Acid
EDTA – A preservative to prevent changes in colour, texture and fragrance.
Propylene Glycol
Bis-Aminopropyl Dimethicone – A silicone that bonds to damaged hair making it feel softer and easier to comb. Many people try to avoid silicones as they can cause build up on the hair, and not allow moisture to penetrate the hair. However, this specific silicone isn’t a bad one as it doesn’t cause buildup on the scalp or hair.
Polysorbate 60 – A surfactant and emulsifier.
Benzyl Salicylate
Eugenol
Hexyl Cinnamol
Linalool
Citronellol
Amyl Cinnamol
Limonene
Hydroxycitronellal
Magnesium Nitrate
Silica – An anticaking agent.
Aloe Barbadensis Leaf Juice
Humulus Lupulus Extract
Phenoxyethanol
Methylparaben
Methylchloroisothiazolinone
Magnesium Chloride
BHT – An antioxidant and fragrant. Can be an allergen.
Butylparben
Methylisothiazolinone
Propylparaben
Ethylparaben
Ascorbic Acid
Sodium Sulfite
Sodium Benzoate – This ingredient is found naturally in cranberries, cinnamon and other foods. It is used is shampoo as a preservative.
Potassium Sorbate

& that’s everything… that is quite a long list!! Specially compared to some of the other products I’ve reviewed in the ingredient breakdown series.
I really have been enjoying this products, so it’s a little disappointing seeing so many parabens in both the shampoo & conditoner. However, they are quite far down on the lists, which would indicate that there isn’t SO much of it within the product. I guess it’s personal choice whether you want to stay away from parabens or not. I will finish up these bottles, but maybe next time choose a combo without parabens!

Thanks so much for stopping by.

You may also enjoy: